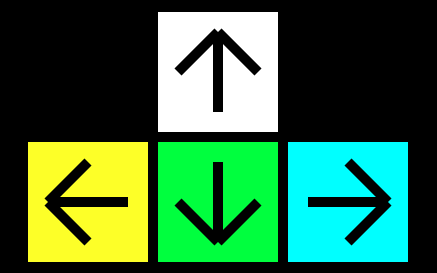 Most of these games are controlled with the arrow keys.

Or if you prefer, you can use WASD.

They also have mobile controls, although for the best experience I recommend using a computer.

I hope you find something you enjoy. That goes for what you find here, and beyond. 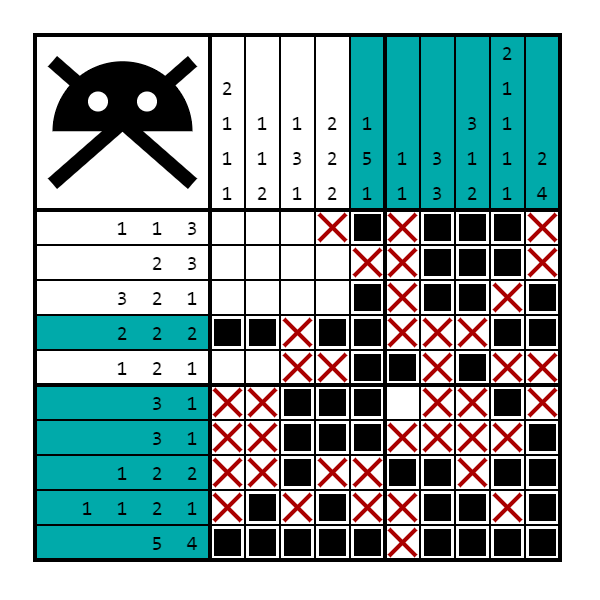 You are Sir Robot, a loveable rogue, and have decided to 'go straight' by working in a bank.

During a wander around the building you end up at the security panel of the main vault.

You're just testing the security, right? 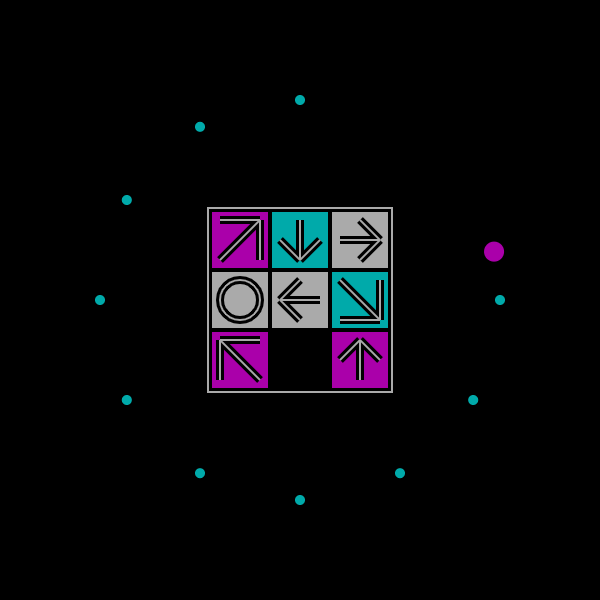 Inspired by: those sliding-block puzzles of party bag and Christmas cracker fame.

There's a picture in a three-by-three grid, and it's all scrambled up, and you have to put it back together again.

To raise the stakes a little, you can imagine you're a spy, and this is part of a secret mission (or possibly a bomb defusal situation). 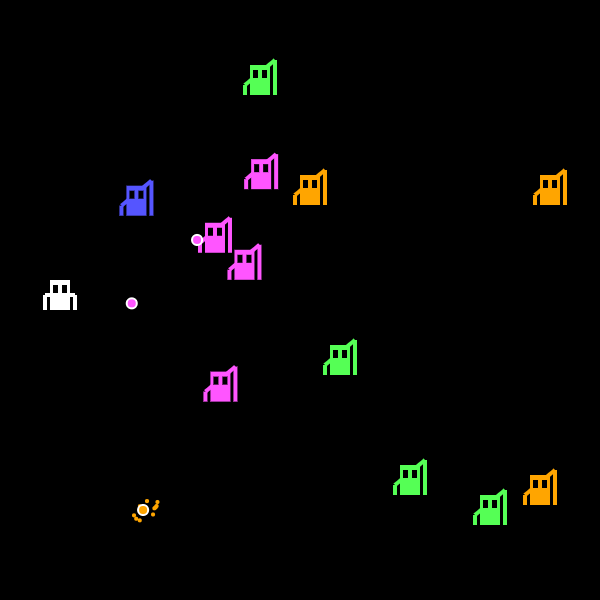 It's that time of the year and you, Honey Shootmoon, are taking part in the annual electric snowball feud.

However, due to your reputation, the entire village has decided to gang up on you. At a hundred to one (or something like that, nobody's done a proper headcount as far as I know) the odds are not in your favour.

Use the arrow keys to move, and WASD to throw snowballs. 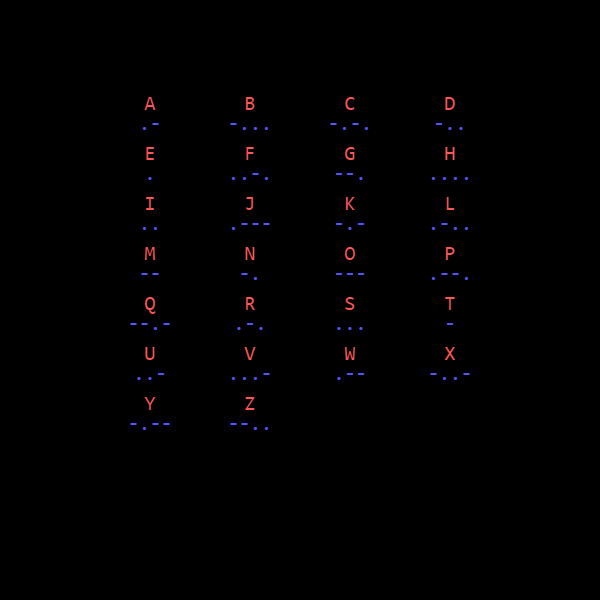 You, Miss Barbican, have such a reputation as the office chatterbox that your charity sponsored silence has resulted in a huge amount of money being raised.

So much, in fact, that you don't feel guilty about taking a little of it for yourself.

However, you really do have an overwhelming need to communicate.

Armed with just a whistle, your plan is to learn Morse code in order to be able to chat to your heart's content whilst still keeping within the rules - if not the spirit - of the sponsored silence. 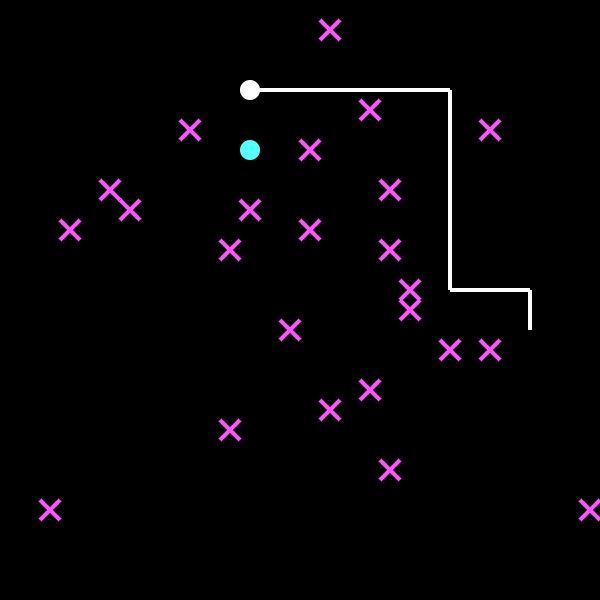 Ever since retirement, you, Captain Shootmoon, have been plagued by strange dreams.

Tonight, you are a snake.

Every time you eat an apple, you grow longer and drop some deadly barbed wire.

Also, you will die if you collide with your own tail.

What could it mean? 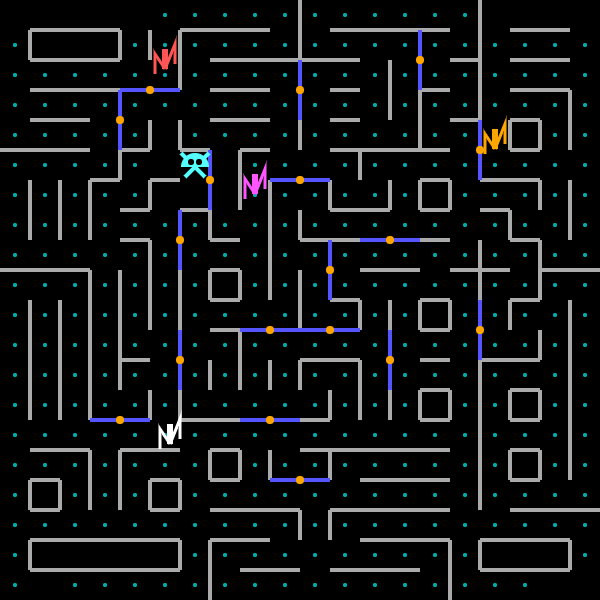 You are Sir Robot, a loveable rogue, and have broken into a mint in the dead of night with one mission in mind: to steal all the coins.

The pink guard can operate the turnstiles, the red guard can throw fireballs, and the white guard can place bombs.

The orange guard has no skills. 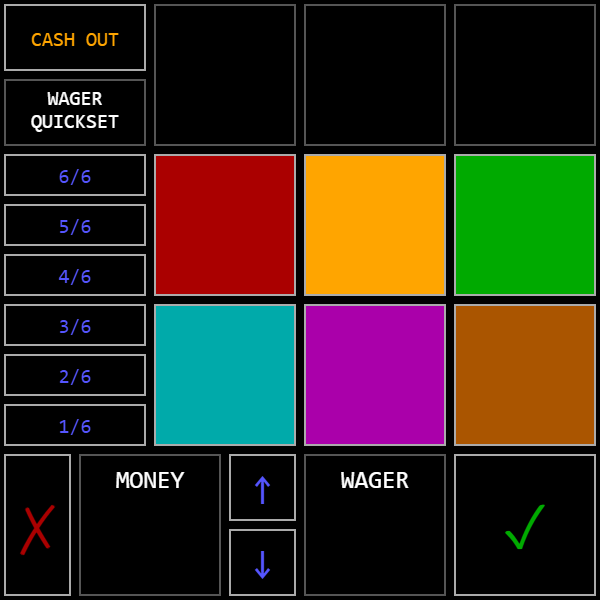 Inspired by: Crown and Anchor.

You, Miss Barbican, have decided to supplement your income by visiting the casino. Your friend Martin Gale has told you of a foolproof system. 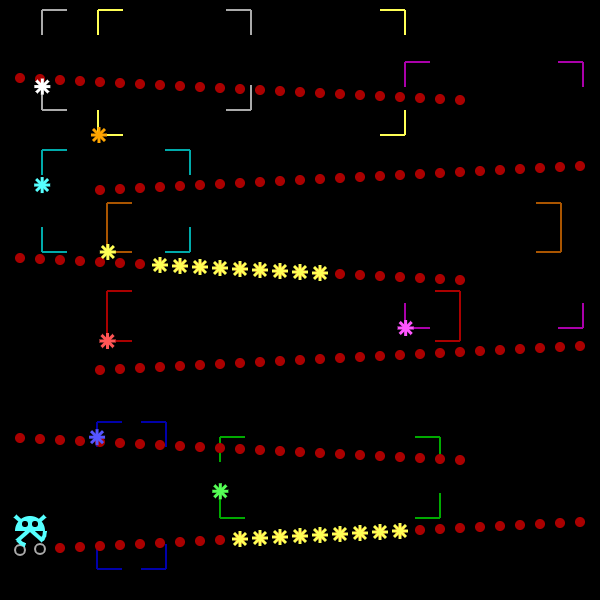 You are Sir Robot, a loveable rogue, and today is your day off.

However, that does not mean you will get any rest; quite the contrary.

To keep your wits sharp you have installed a new alarm clock. In order to turn it off and start your day, you must press 148 floor tiles and avoid a series of electrical sparks. 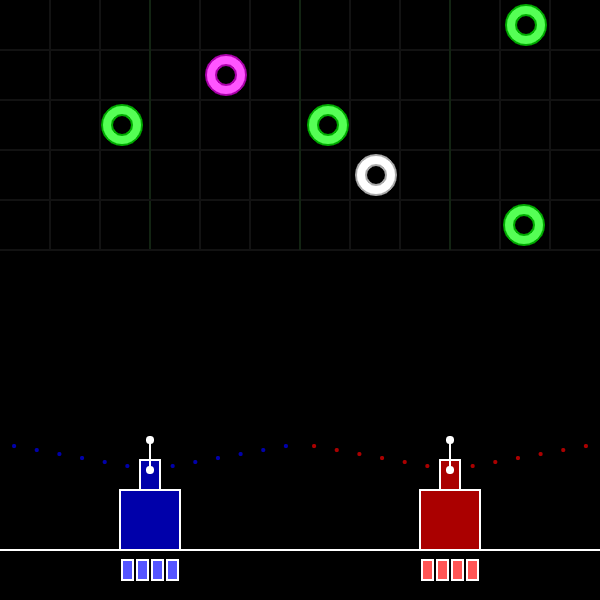 Test your skill against a friend - or whoever you manage to persuade to play this game - in this space-shooting adventure.

Blast an enemy craft out of the sky to send a projectile hurtling towards your opponent (the 'friend' from the previous sentence).

The first player to run out of health loses the battle. 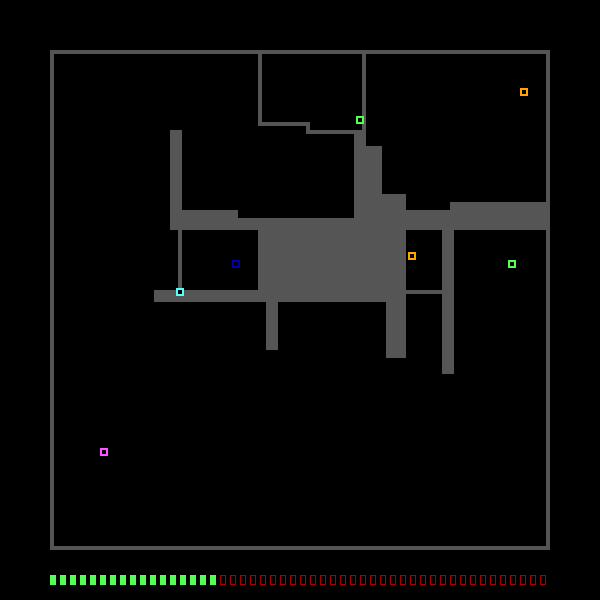 Despite being long-retired, you have been called back to carry out one last job: painting at least seventy-five percent of a floor.

It sounded easy enough, but upon arrival at the factory two surprises came out of the woodwork: not only are you against the clock, but the factory is full of giant ants who will attack you and destroy your painting machine if they catch you. 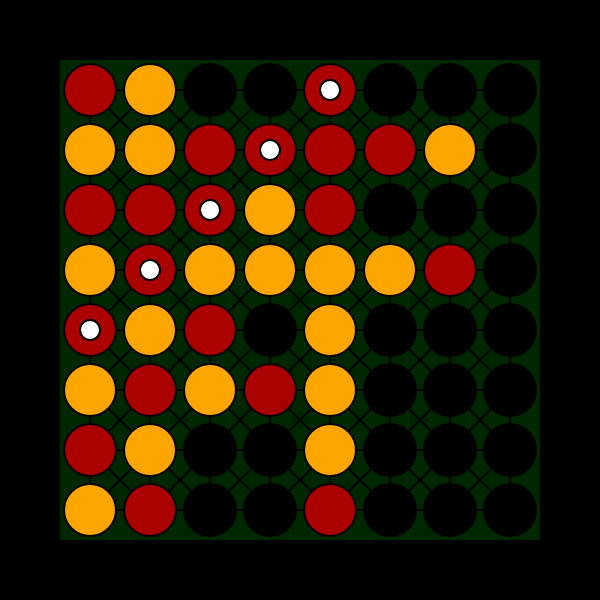 The aim of the game is to get five in a row on an eight by eight rotatable board.

Should you drop a counter into a non-vacant position, the existing counters will be moved along to make space. 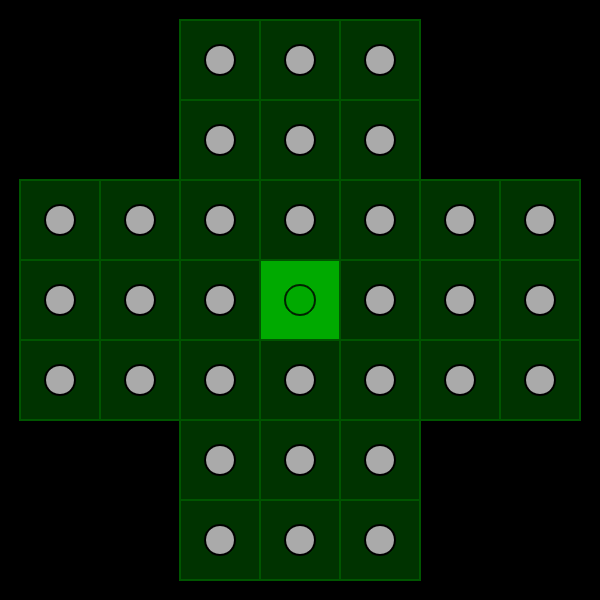 Move pegs by jumping them over the peg next to them.

Pegs which are jumped over get removed from the board.

Win the game by ending up with just one peg, in the middle of the board. 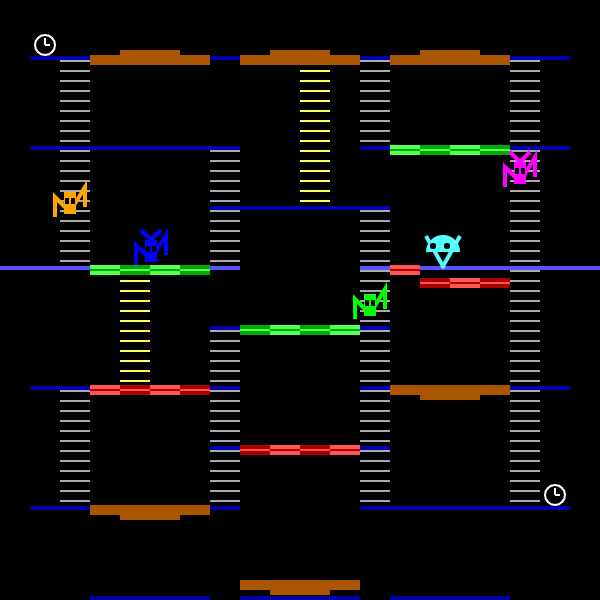 You are Sir Robot, a loveable rogue, and have broken into a factory in the dead of night with one mission in mind: to steal all the sandwiches.

The pink and blue guards are highly-skilled, the orange and green ones less so.

Scattered around the map are alarm clocks, which will temporarily trick the guards into falling asleep. 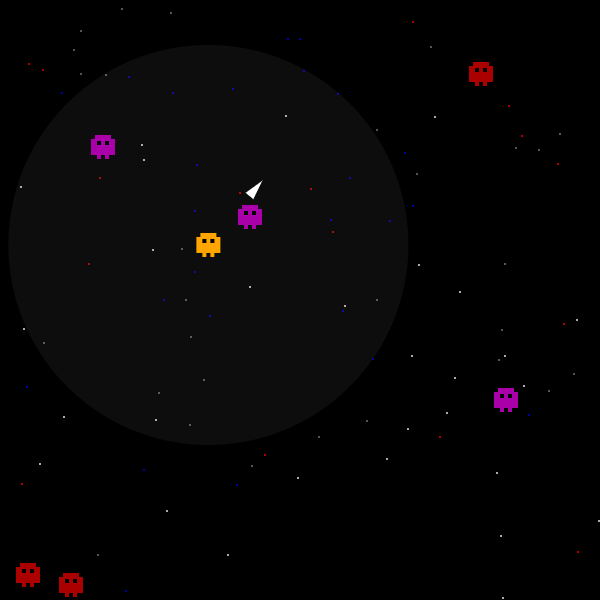 You, Captain Shootmoon, are fourteen years into retirement and enjoying a peaceful life.

The phone - or whatever equivalent to a phone exists in the future, or in space, or wherever it is you live - rings.

'Shootmoon,' says the mysterious voice, 'You are needed. For an endless war.' 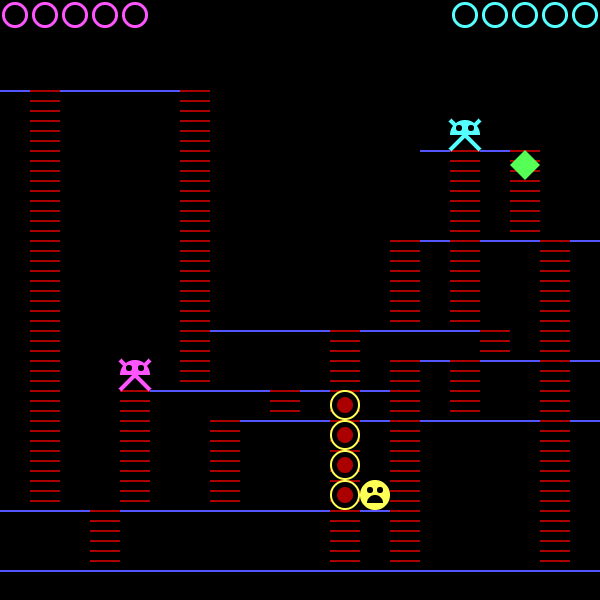 Sir Robot, a loveable rogue, faces his old nemesis Dame Robot in a challenge to decide once and for all who is the better purloiner of goods.

The rules are simple: the first to steal five diamonds is the winner.

Should you wish, the scores (and the game) can be reset at any time by pressing N. 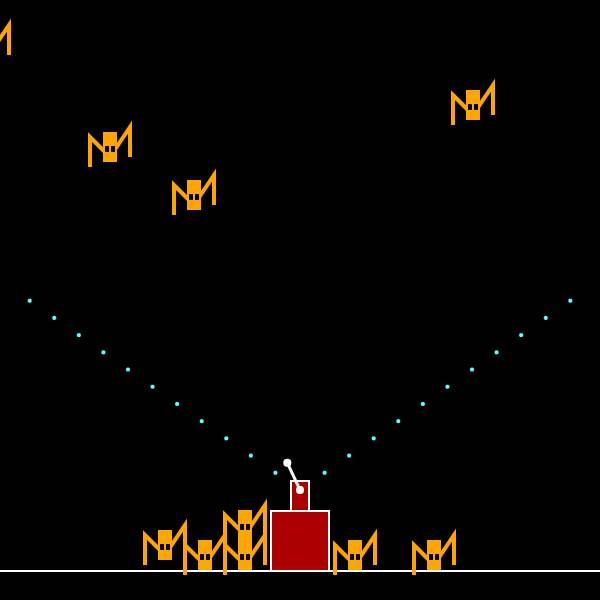 War has broken out between the planet you're from and some other planet where everyone looks like massive spiders, and you've landed the cushiest job of all: remotely operating some sort of cannon from the comfort of your living room.

The orange and green attackers will land on the ground by the cannon, and will climb up and destroy it when there are four of them.

The pink and blue attackers will fly directly at the cannon to destroy it.

No big deal either way, it's not like you actually die or anything. Like I said, it's a really cushy job. 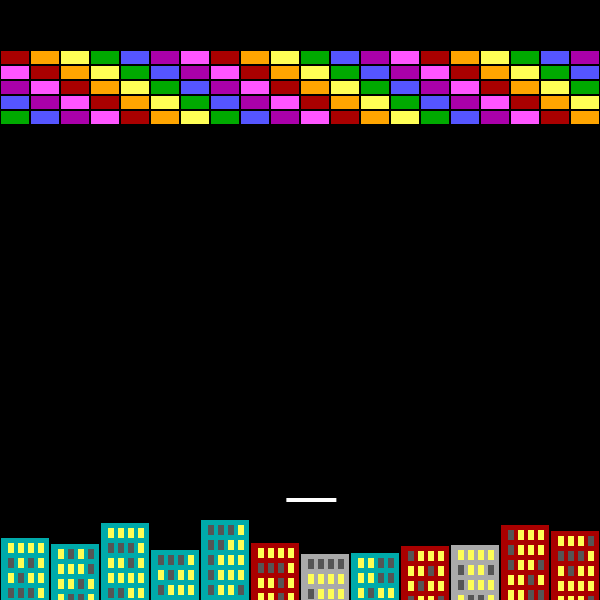 Since starting a job at a shop in order to fill your post-retirement days, you, Captain Shootmoon, have been plagued by strange daydreams.

This time you are controlling a spaceship, protecting the city from a bouncing ball and a hoard of aliens.

At least it's only a daydream. 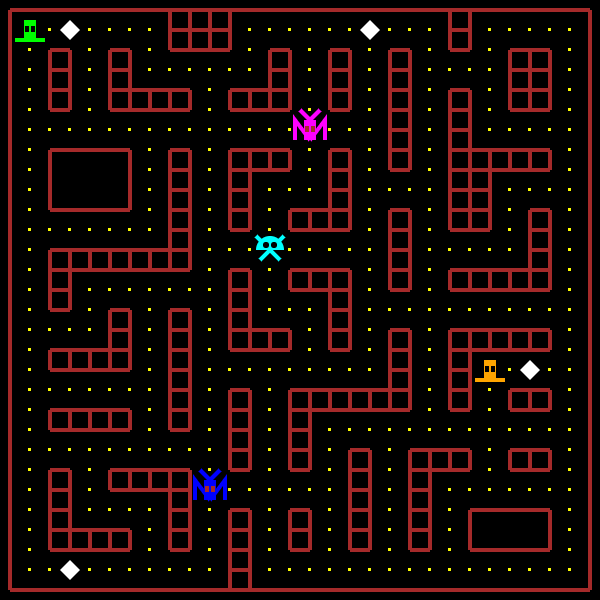 You are Sir Robot, a loveable rogue, and have broken into a factory in the dead of night with one mission in mind: to steal all the dots.

The pink and blue guards are highly-skilled, the orange and green ones less so.

Scattered around the map are diamonds, which will give you the temporary ability to knock the guards down. 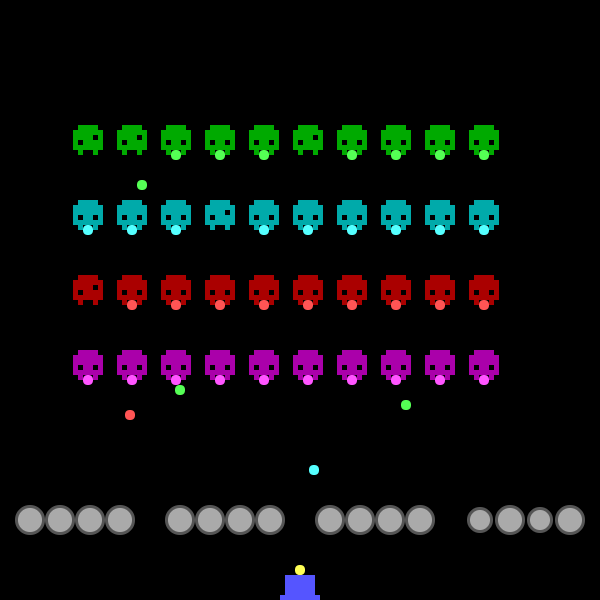 With one day left until retirement, you, Captain Shootmoon, were looking forward to a peaceful last few hours of work.

No such luck. For today is the day the Alien Landing Group has chosen to invade your planet.

If they reach the ground, it's game over. 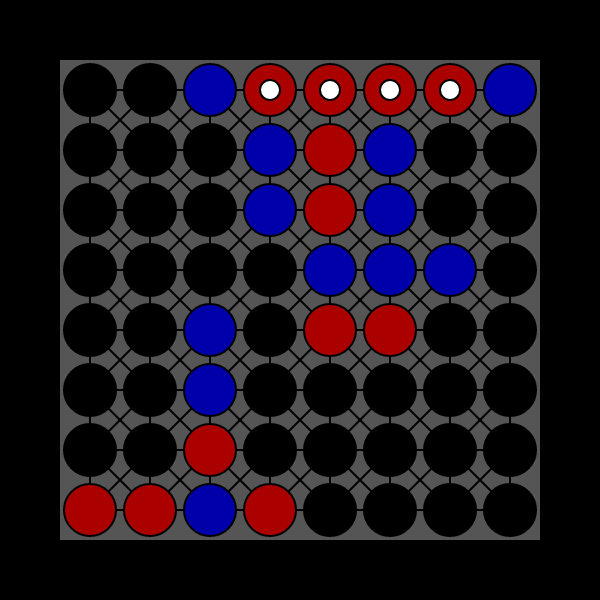 The aim of the game is to get four in a row on an eight by eight rotatable board.

Should you drop a counter into a non-vacant position, the existing counters will be moved along to make space. 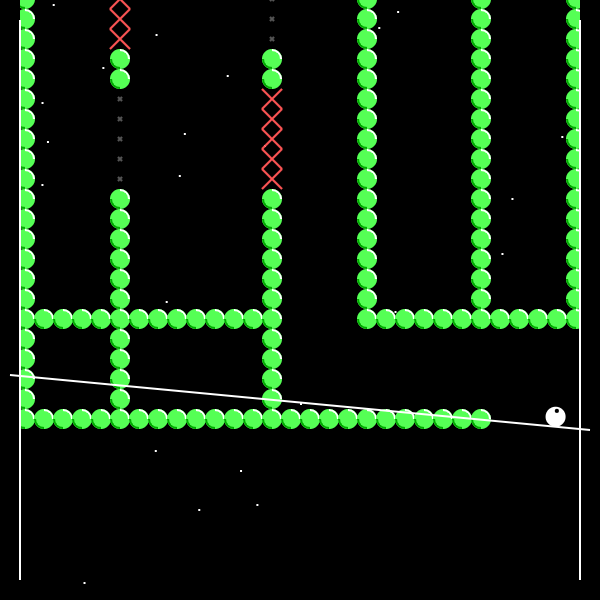 Your mission: to deliver a delicate glass ball to a space station.

The problem: sixteen perilous areas of walls and lasers stand in your way.

Your slightly-questionable chosen method of delivery: two giant cranes rolling the ball around on a girder. 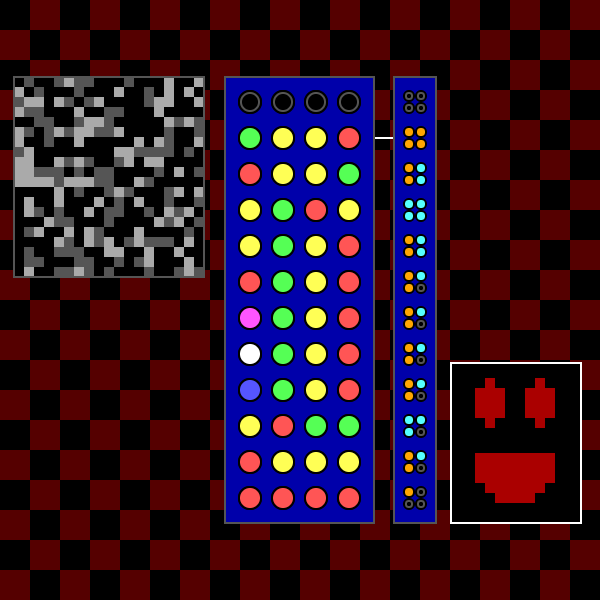 A few short weeks into retirement, you, Captain Shootmoon, have been called back to carry out one last job: cracking a code.

If you fail to guess the code by the time the board is full, it's game over. 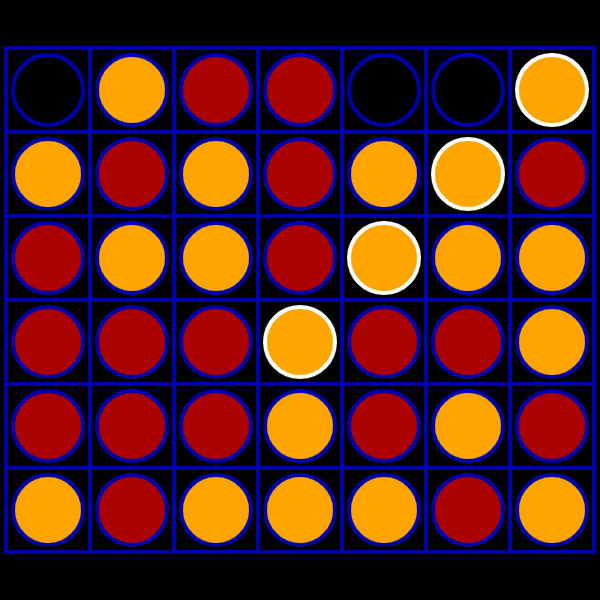 It has the same rules as ever, except with a twist; if one of your counters is at the bottom of the board, you can remove it.

If you would like to change the colours of the counters or board, you can do this with the delete, end and page down keys.

If your opponent keeps messing around changing the colours, you can remove this option by pressing K.

If your opponent presses K to prevent you setting the colours as you would prefer, I cannot help you with this. 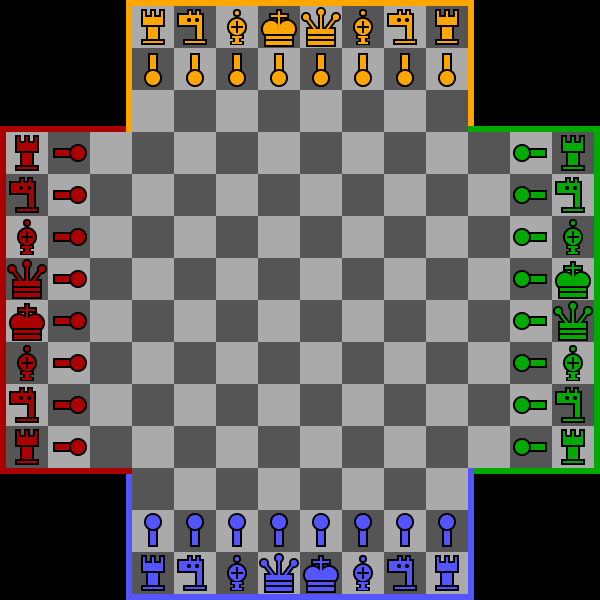 A four player version of the classic game in which the battle lasts until just one player remains.

Upon capturing an opponent's king, their army becomes yours.

Although this game is designed for four players, it can be played by two if they control two armies each. 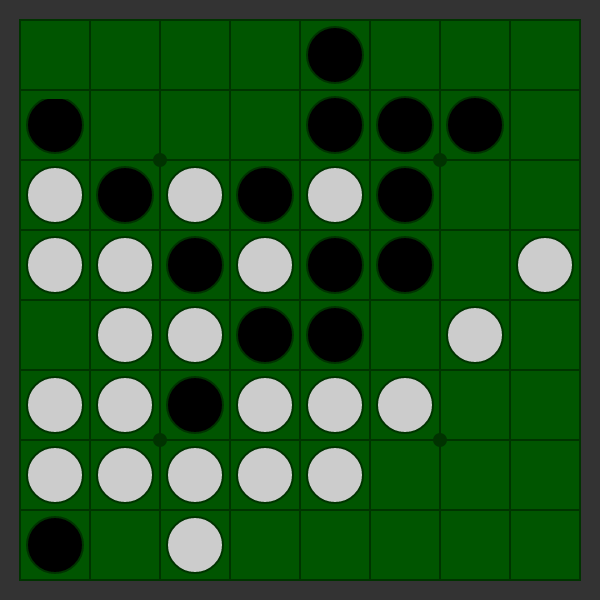 Place a token so that one or more of your opponent's tokens are flanked between two of yours. This can be on a row, column or diagonal. The flanked tokens then become yours.

If no move can be made, play passes to the other player.

If neither player can make a move the game ends and the player with the most pieces on the board wins.

Pro-tip: getting the corner squares is generally considered a good thing. 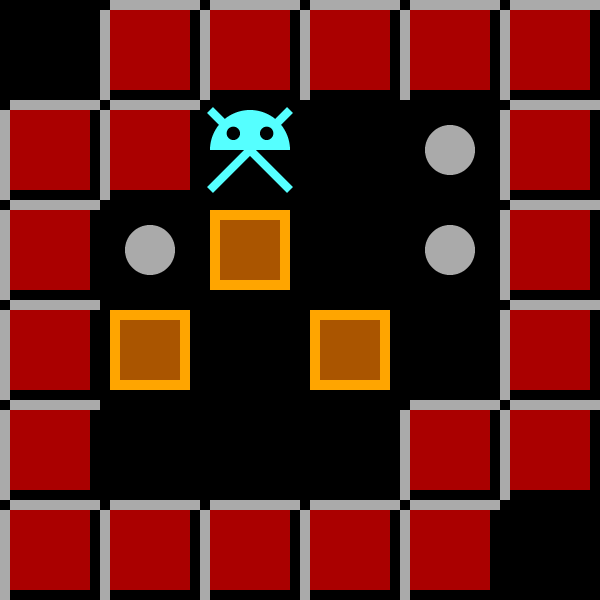 All levels designed by: Jordi Domenech.

You are Sir Robot, a loveable rogue, and have decided to organise your vast warehouse of purloined goods.

Each crate has a place, and can be pushed but not pulled.

Sounds easy enough. Or does it? 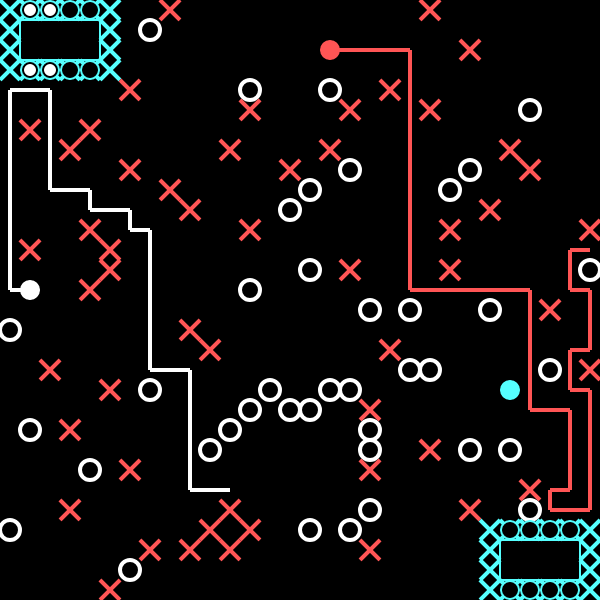 You, Captain Shootmoon, have - again - been plagued by strange dreams.

You awake, and inform your wife that you - again - dreamt that you were a snake. Every time you ate an apple, you grew longer and dropped some deadly barbed wire. 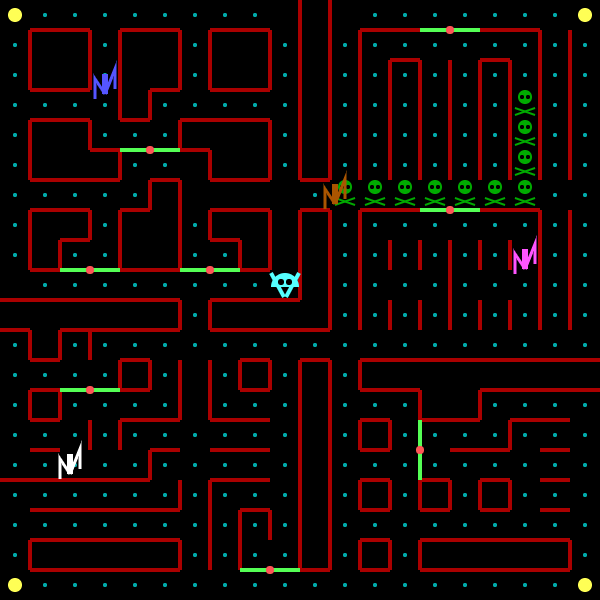 You are Sir Robot, the now-legendary thief of turnstile-containing mints, undertaking yet another coin-stealing heist.

The pink guard can operate the turnstiles, the blue guard can freeze you in ice, the white guard can place bombs, and the brown guard lays a trail of poison.

Picking up the bells from the corner of the factory will temporarily trick the guards into taking a break. 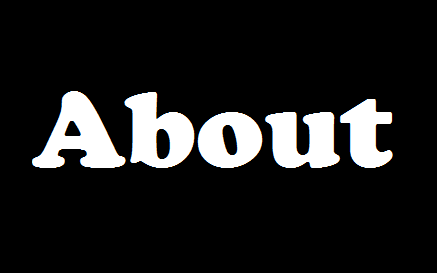 Having worked in a few offices, and had a few coffee breaks, I thought it might be useful if a website existed which had a set of browser games to spend a few minutes playing.

Naturally, being aimed at people holding hot drinks, all can be controlled with just one hand.

Have a blessed day,

This site does not use any cookies, and is not recording any data about you.